MIAMI Central High School technology teacher Frank Houghtaling loves it when he sees that light of understanding flash in a student’s eyes. “They make the connection with what they are learning in my technology arts and engineering class with what they are learning in geometry class. It becomes real to them. Suddenly their grades go up in math. They ‘get it’ because they have to in my class. They have to input dimensions and angles. We talk about all the different angles. It’s a language of numbers and spatial relationships that results in something tangible.” 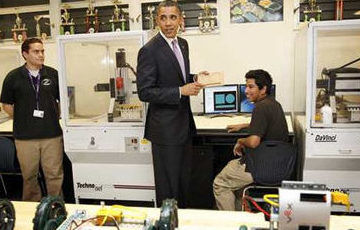 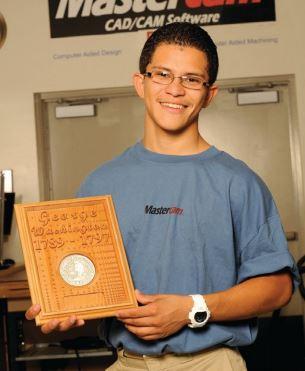 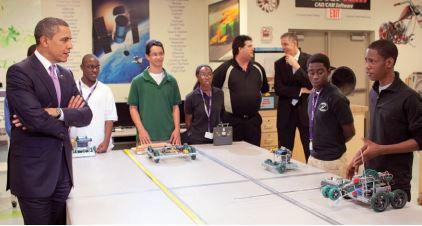 Houghtaling thinks the connection between theory and application is one reason his students perform better on the Florida Comprehensive Assessment Test (FCAT). The impressive turnaround school drew local and national attention last spring when one of Houghtaling’s students, Dagoberto Cruz, won first place in the nationwide “Mastercam Wildest Parts Competition” and when President Barack Obama visited Miami Central to kick off a national education initiative.“You might not think the two events could be linked in the same sentence,” says Houghtaling. “Having a president visit was a highlight of my career and the ultimate confirmation to this school. However, I give a lot of credit to all my kids and their accomplishments. Dagoberto’s winning the contest has really excited and inspired many kids to work harder and achieve more.” For nearly a decade, the Central Rockets had one of the worst academic records in the state of Florida. Its sprawling campus was unkempt and dangerous. Only a third of students said they felt safe at school. Florida’s governor at that time, Jeb Bush, imposed an education overhaul that included the nation’s first statewide private school voucher program for students in failing schools and testing to grade school performance. In 2008, the school hired the state’s top principal and replaced more than half of its teachers. Central also developed a partnership with Teach for America, the national program that places top college graduates in struggling schools. The new administration made discipline a priority. They enforced the dress code and encouraged students to arrive on time. Classroom teachers focused on remedial skills, and a coalition of parents and alumni reached out to the community for additional support. Within two years, student scores rose dramatically. Central achieved a record-high C grade. Former Governor Bush remains an education advocate. Many states have adopted similar policies and the current administration has applauded Bush’s dedication and results, a refreshingly nonpartisan gesture on both sides. It was Bush who suggested that President Obama—a strong supporter of STEM education—go to Miami Central High School to launch the national initiative. Both visited the school, along with Education Secretary Arne Duncan, last March.

Houghtaling said the President spent about 30 minutes touring his class, talking to his students, and reviewing their projects. The President had this to say about Houghtaling’s program during formal remarks at the school: “You’ve got a technology program here that’s preparing kids for the manufacturing jobs of tomorrow. I saw some of the work that they were doing in this lab. It was outstanding stuff. And it matched up with what I see when I go to factories all across America. You can’t work on a factory floor today if you don’t have training in computers and basic math skills and understanding of technology. Those are the jobs of tomorrow.” To give the students variety and keep their interest level high, Houghtaling intermixes conventional programming and projects, such as CO2 cars, with Mastercam Art projects. Last year one of the class’s biggest projects was making 3.5″-dia. aluminum coins. The students also engrave rings and design and fabricate signs using the Art software. “Art really got the kids excited, motivated, and provided a new tool to express their creativity—‘wild’ enough to enter Mastercam’s annual, national contest,” says Houghtaling. And win. Dagoberto Cruz took first place in the high school category for a plaque and coin he made that features an image of George Washington. Dagoberto followed his teacher’s standard plan. He was first introduced to the programming software in the beginning of the 2010–2011 school year. He learned the introductory computer-aided design/ computer-aided machining (CAD/CAM) program, QuickPart, liked it, and moved on to more advanced machining. He became enamored with Mastercam Art and designed his now famous coin and entered the contest. He expressed interest in getting Mastercam certification through Mastercam University online. Dagoberto worked hard, took the certification test and passed. “This isn’t an easy test,” says Houghtaling, “and it’s not scaled back for high schoolers at all. It’s the same test everyone takes, whether they are 16 or 60. The test is 4 hours. I am so proud of him.” 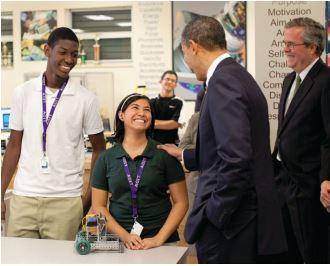 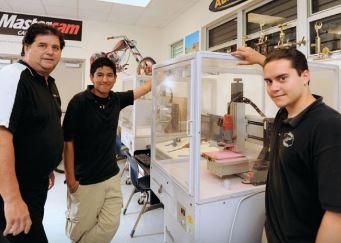 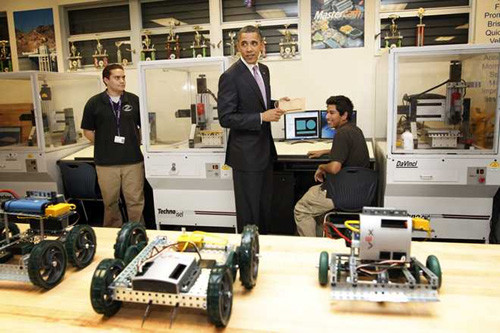 Then, shortly after Dagoberto received his certification, he found out he had won the Wildest Part Competition and its $1,000 award. He also was a winner at the County Youth Fair. “Next thing you know, he’s meeting the President of the United States,” says Houghtaling, “and driving a car he purchased with his winnings. All in a nine month time frame. It’s been amazing to watch and inspiring to the other students.” The inspiration is not just in the STEM classes, it is school-wide. “The students know that Dagoberto’s success and recognition was because he learned Mastercam,” says Houghtaling.

“He’s been in the newspaper with the President, his name has been on the PA system, and he’s famous. Now everybody wants to learn it.” It’s important to note that Dagoberto is just one shining example of a Miami Central High School student. Houghtaling said his seniors who graduated in 2011 had been failing school for 12 years.
“There are hundreds of bright lights around here,” he said. “It’s the whole community coming together to raise these kids up. They realize they can do things.” He calls it a domino effect. If two or three students show they can accomplish a task, then the next one wants to do it too. Houghtaling says his biggest problem in his classroom is getting the kids to leave it. Several try to skip other classes to come to his room. “Here, they can pick up a saw and a drill. They can go to the computer and design something and then they go to a machine and make it. They hold it; they take it home. Their ideas and dreams soar.” That is transferring to rising test scores, too. .