A student-designed and constructed structure made of undulating slices of plywood has received wide acclaim at Texas A&M University. The installation is constructed from interlocking wooden shapes connected by notches and aluminum plates and hung from cables attached to the ceiling. It was designed by three students – Josh Canez, Nick Schaider and Lauren Hensley – from the College of Architecture’s Department of Architecture working under the supervision of Professor of Architecture Mark Clayton. The use of advanced digital fabrication methods made it possible for the students to design and build the structure quickly and inexpensively.

“We received an open-ended opportunity from our professor to use digital fabrication for a studio project,” Canez said. “Digital fabrication gives you the ability to rapidly produce hundreds of unique pieces. In a little over one semester, we designed and built a project only made possible by the use of a CNC router. This project provides a good prototype of how digital fabrication could be implemented at a building system’s scale.”

Started as a Small Furniture Project
The project called “Plywood Mesh #002” (PM#2) originated in an Experimental Home Architecture studio led by Clayton. “It started as a small furniture project and evolved into an 18-foot by 16-foot sculpture,” Canez said. The sculpture is placed in a high-traffic location with few other aesthetic features. “The form is a dynamic gridded mesh drop ceiling that redefines the location and creates a sense of place,” Schaider added. “It is intended to add beauty to this space without impeding pedestrian flow.” PM#2 is composed of 33 ribs each built in three modular sections for a total of 99 plywood components. It is hung from a total of 36 1/16 inch steel cables attached to 18 surface-mount ring plates. Each cable carries a load of approximately 30 pounds. PM#2 hangs above the walking area and ranges from 7-feet 8-inches at its lowest point to 10-feet 3-inches at its highest, avoiding all existing lights and fire suppression equipment. 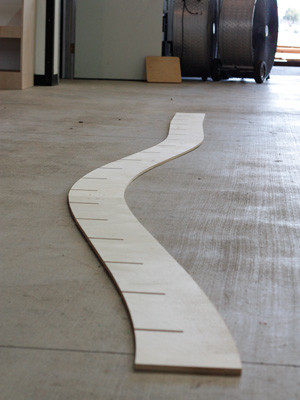 “The vast majority of architectural education begins and ends with producing a conceptual design,” Clayton added. “This project was different because it helped the students understand how to execute a project in full. I just had to give them a little push and they took the ball and ran with it. They did everything including the conceptual design, working drawings, contacting and selecting suppliers, ordering the material and finally building the project. They also addressed compliance issues in a very risk averse university campus, resulting in the use of enough aircraft cable to suspend several automobiles.”


Reaction Has Been Very Positive
Reaction has been overwhelmingly positive to the structure which is deployed underneath a ceiling on the first floor in building A of the Langford Architecture Center. “We have gotten compliments from professors and many people we don’t even know,” Canez observed. Comments on the project’s Facebook page include: “I think it is really cool and adds some flair to the first floor ‘concrete’! Hope it stays.” “This looks awesome!!” “Wow. Very cool. Might have to come see it sometime.” “That really looks like a lot of fun! Wouldn’t it be neat to do hall ceilings like that!” “Very nice design!” “How lovely! It is reminiscent of the Kogod Courtyard designed by Norman Foster at The National Portrait Gallery in DC.” “Looks great! Hope it stays till I visit A & M next time.”

“This project is an example of how digital fabrication acts as an enabler of ideas,” Hensley said. ‘Its added efficiency and higher levels of precision make it possible to produce more complex and interesting forms. High precision components can be produced in a shop at much lower cost than in the past without worrying about the weather. These pieces can be assembled at the site very quickly. Digital fabrication is changing the way that we build – not just sculptures but actual buildings as well. We are grateful that we attend an institution that that supports this technology.”

Canez and Schaider got hands-on experience with digital fabrication methods when they worked on the Aggie solar GroHome project, the College of Architecture’s entry in the U.S. Department of Energy’s Solar Decathlon.

“We realized that when you build something at a full scale as a prototype you have to work out the details to a much finer level than when you are simply doing a design project on the boards,” Schaider said. “The smallest mistake or inconsistency really stands out when you take the leap from the design board to the real world.”

The team of students designed the structure with Rhino, first creating a NURBS surface to represent the overall form then using sectioning to cut the surface into individual pieces bi-directionally. The ribs were nested onto sheets of plywood in order to obtain the most efficient use of the material. They used a Techno CNC router to cut out the 99 unique plywood pieces that make up the sculpture to very close tolerances. Only one person was needed on an occasional basis to load and unload the plywood sheets on the CNC router. Assembling the project was like putting together a jigsaw puzzle. “It would have been practically impossible to build this structure using manual methods but with the CNC router it was easy,” Canez said.

The LC Series from Techno Inc., New Hyde Park, NY, provides a number of critical features that allow it to deliver accuracy and long-term reliability at a level that has previously only been available from machines at a much higher cost. Techno’s LC Series machine is equipped with ball screws on all three axes with closed loop servo motor drives. This high tech superior drive system provides smooth play-free motion, which requires no adjustments and minimal maintenance. A closed loop servo control system provides constant position feedback, higher power, and smooth continuous motion that eliminate the possibility of losing position in the middle of a part. The Techno servo system’s ability to cut 3D continuous contours at up to 800 inches per minute is far faster than most machine tools. The machine comes fully assembled and includes Techno’s Windows-based CNC G-code interface with free lifetime software upgrades.

“Without the router this project would have been nearly impossible because of the huge amounts of time and money required to produce each unique piece manually,” Canez added. “The complexity of the ribs made them too difficult to cut by hand. We would have had to make templates and cut each piece with a jigsaw. It’s difficult to even estimate the amount of time that would have required.”

Turning Concepts into Reality “You are missing out on a lot if you do not build at full scale,” Hensley said. “The CNC router gives us the ability to turn our concepts into reality. It makes it practical to build at full scale virtually anything that we can imagine. The Techno machine is accurate enough to meet the requirements not just of prototyping but also of regular production. In the past, design technology was advancing much faster than construction but with the advent of CNC routers and digital fabrication, construction is finally keeping pace.” 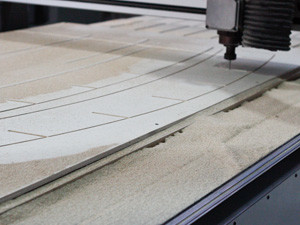 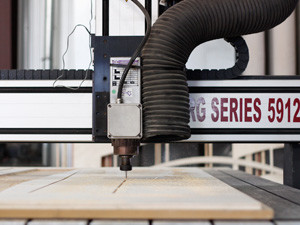 “I expect this technology will become much more widely used in a range of construction projects especially for ornamental work, high tolerances, expensive materials and highly critical parts,” Schaider added. “For those items that are difficult to fabricate, now you can simply cut a profile in plywood. The CNC router will reproduce exactly what the designer has conceived, making it possible to ensure that every piece fits together. The time required for fabrication is substantially reduced because you don’t have to spend time making things fit together. We found the machine to be very easy to operate so there was practically no learning curve.”

“These students are extraordinary individuals,” Clayton concluded. “It’s amazing what they accomplished in just one semester. It’s very unusual for architectural students to get this rich of an experience while they are still in school. It’s a thrill to see and perceive PM#2. We are planning to do a lot more projects like this and hope they become part of the regular curriculum. The CNC router that makes this possible is in very high demand by students. Having a 5-foot by 10-foot bed is a major asset because it allows us to handle 4- by 8-foot stock. I have heard nothing but good reports from the people that have worked with the Techno machine.”