The HD-II Table Top, Atlas 4×4, and Titan 4×4 are good choices for gunstock manufacturing due to the compact machine sizes and compatibility with the 4th axis rotary table option.
These machines are all steel constructed with the rigidity and clearance to handle the hard woods used for gunstocks.

The Titan Series machine is all steel construction, providing the rigid foundation required for ultra-smooth routing results. The Titan machine includes a 12HP HSD automatic tool changer with 8-position tool rack, and a pneumatically operated dust collection hood that concentrates air flow at the cutter, which provides optimal dust collection performance. The multi-zone vacuum t-slot table is constructed from very hard Phenolic, which is very stable material, and holds tight tolerances for precision cutting. The Titan series is connected to a 10HP Rotary vane vacuum pump, which has very quiet operation (82db). For easy sheet alignment, (3) material pop-up pins are included and precisely placed to handle and align various size materials. The Titan series is powered by brushless drive motors, and is controlled via easy to use and learn hand held controller. 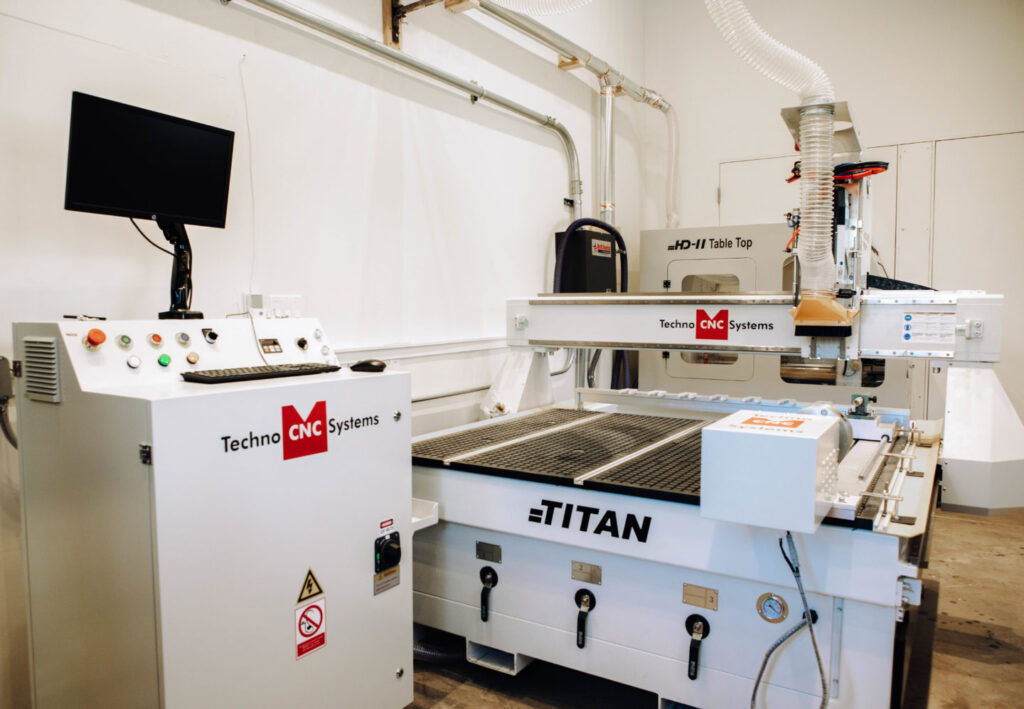 The Atlas Series machine is all steel construction providing the rigid foundation required for ultra-smooth routing results. The Atlas machine includes a 4HP HSD collet spindle. This CNC router model includes a dust hood that has concentrated air flow at the cutter, which provides optimal dust collection performance. The multi-zone vacuum t-slot table is constructed from very hard Phenolic, which is very stable material, and holds tight tolerances for precision cutting. The Atlas Series is connected to a 10HP Rotary vane vacuum pump, which has very quiet operation (82db). The Atlas series is powered by brushless drive motors, and is controlled via easy to use and learn hand held controller. 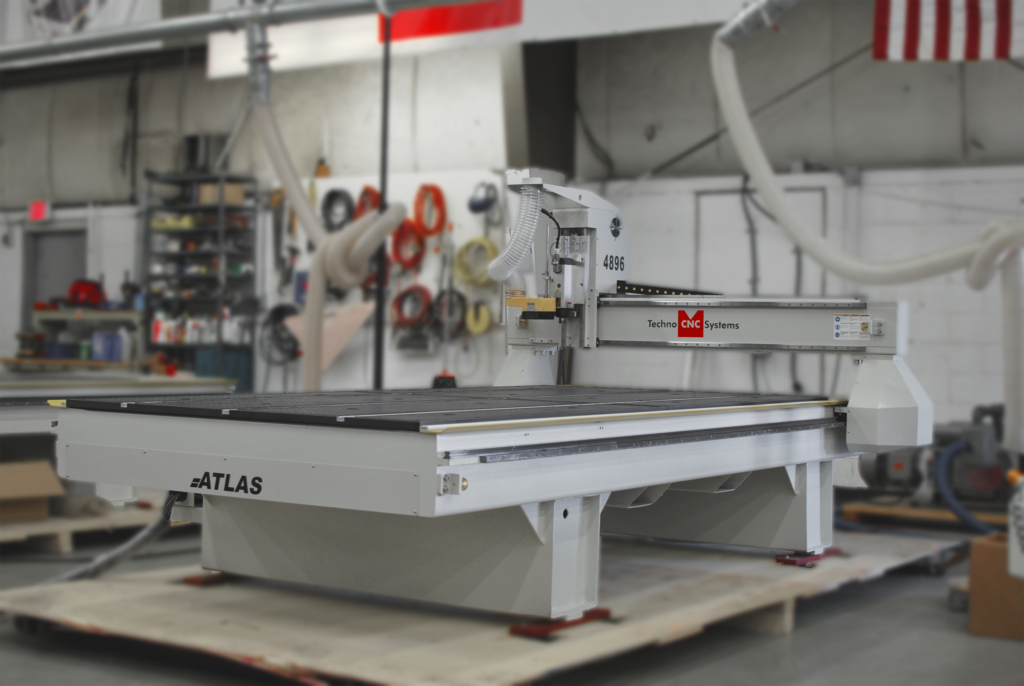 The HD-II Table top machine includes a 2HP HSD high frequency collet spindle, and a  vacuum t-slot table, which allows for mechanical clamping/vacuum hold down. The gantry height is 7-1/2″, which provides maximum flexibility to route sheet goods and larger taller parts. The machine drive motors are Nema 34 high powered brushless motors, thus providing the power to route any wood, plastic, foam, or non-ferrous metal. The controller is a stand-alone hand held controller. The buttons on the controller are all pre-programmed to perform certain machine instruction, thus making machine operations easy to learn and use.
learn more 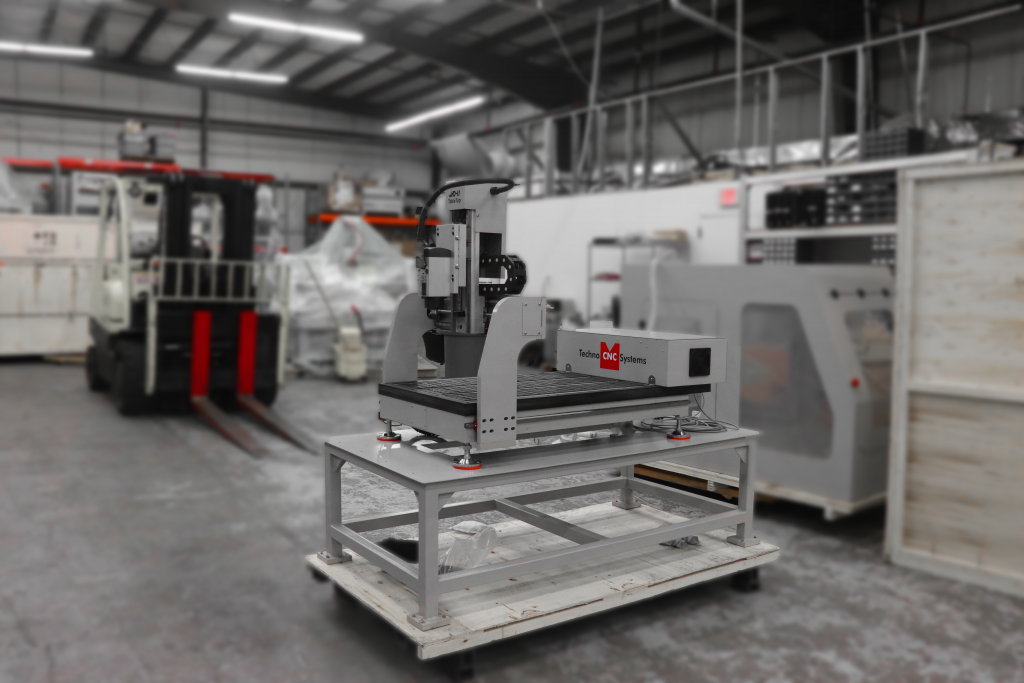 From one gunstock maker to another

“Overall, I am extremely satisfied with all three of my Techno CNC routers. When I purchased my first Techno CNC router over 15 years ago, I had to figure out my own groove for CNC equipment. I knew nothing about CNC. After some time and late night practicing, I can now run my machines with my eyes shut. My second machine was even easier to learn how to use, since it had the same controller as my Premium class. And now that I purchased their new Titan Series a few months ago and learned about WinCNC controllers, I can do so much more.”

After working in the gun business for nearly 20 years, Jarod Menke decided it was time to move on to bigger and better things: designing and precision cutting his own gunstocks. Menke was born and raised in Carol, Iowa where he worked as the head rifle assemblyman for nearly 20 years. He worked closely with the owner, practicing troubleshooting, developing products, etc. The company purchased gunstocks from another company in South Dakota, where Menke was always disappointed with the quality of the gunstocks. “There were always large gaps between the metal and the wood,” said Menke. Eventually, Menke had an idea: “what if I could produce the gunstocks, instead?” Eager to start designing, Menke asked his boss if, instead of purchasing the gunstocks from his North Dakota retailer, he would purchase from him.
<br>
Jarod’s Gunstocks came to life in 2004 when Menke went off on his own to design and produce his own gunstocks and pistol tips. “I took a leap of faith. I knew nothing about CNC equipment, but I knew I could produce the gunstocks more efficiently and effectively than the company in South Dakota. And I already had my boss on board with the idea that, if I could produce my own gunstocks, he’d purchase them from me instead.” Menke went off to get a loan from the bank to purchase his first Techno CNC router. “I knew my new business endeavor required a CNC router. I had no experience in the CNC field, but had learned about Techno CNC Systems from a friend I knew in California. We went to this big gun show together every year, and he had a Techno CNC router for his shotgun business. He had nothing but great things to say about his router, so when the time came for me to purchase my own CNC router, as well, I knew Techno CNC would be a great fit for me, too.” He explained how the price point was perfect for what he could do with the router, and much more affordable than any other CNC company he researched.&nbsp;<br><br>
He began precision cutting pistol grips and gunstocks using his Techno CNC router. He is able to build gunstocks and pistol grips that fit semi-automatic rifles like the Ruger 10/22, and complete rifles. He now makes pistol grips for firearms like Ruger Mark III and Mark IV, and victory grips. Menke’s grips fit over the frame of different series of guns. His precision cut pistol grips allow for individual finger grooves, which overall, give a better feel on the gun and a more comfortable fit.
<br><br>
Menke purchased three 4-axis machines from Techno. First, he purchased a Premium Class 48×48 with an automatic tool changer + 4th axis rotary table in 2004, followed by a LC Series 48×48 with a smaller gantry clearance a few years later, and now, a new 48×48 Titan Series CNC router with a 12 HP automatic tool changer spindle + 4th axis rotary table in 2019. Menke runs his Techno routers 10-12 hours per day x 6 days a week. “As the models go up, they get better and better. After purchasing my LC series after the Premium Class, I could see a huge difference in the quality and craftsmanship of the router. I could see how much better the machine already was after a few years of expert engineering a new series. Now, with my newest 2019 Titan Series CNC router with an automatic tool changer, I can do even more. My Titan Series came with a WinCNC controller, which was different than the previous controllers that I was used to. I was able to call up Techno and have the company configure the system to operate with my original NC codes. They were able to tweak the programs for me, and I was able to decipher some of the code myself. The system is remarkable. The machine literally tells you which line you need to change in the code, and where to change it (example: in a 40,000 line code, it will tell you line 392 needs changing, etc). I had to change a letter here and there. It was nothing crazy, but it was awesome how the software recognized the changes that were needed.”

“When I originally came across Techno and spoke to Roy, I fell in love with the company. I quickly learned how great the company’s technical support was, and how the technical assistants are always so willing to help you learn and solve your problem. I am always able to get a reliable answer. It is a huge bonus when the technical analysts are able to talk you through any problem you are having, and I am able to get on the phone with them in minutes. I’ve also learned how convenient it is to acquire replacement parts, even though my first two Techno CNC routers are over 15 years old. I rarely have parts break, but when I do, I know that Techno stands behind their machinery for life, and I’m able to replace anything,” explained Menke.